I Have A Dirty Little Cycling Secret… 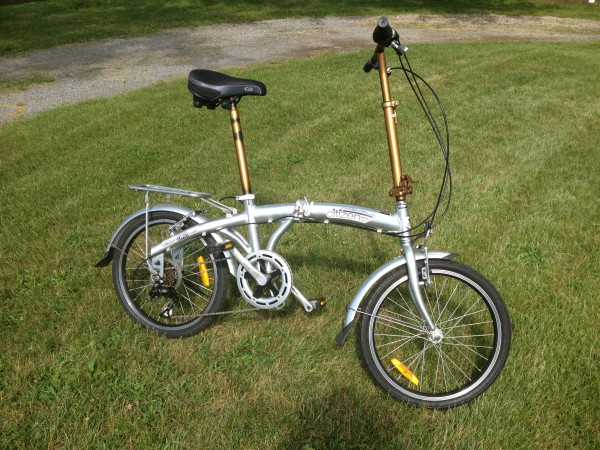 …I’m a huge fan of folding bikes. Yes, it’s true. This Cannondale riding pedal snob (I ride clipless) actually likes those godforsaken monstrosities. I acquired my first folding bike, a Dahon Boardwalk 6-speed, about 4.5 years ago. I keep it tucked away in the corner of my office in NYC. It’s been incredibly handy for running between my employers various properties and for those unplanned after-work outings. Another bonus is that it’s not a bike commonly targeted by thieves. I can lock it up without the concern of losing hundreds or even thousands of dollars. After-all, one can purchase the same bike for less then $300 second-hand. It’s also incredibly easy to transport. When folded it fits in the trunk of virtually any car. It’s a very useful ride.

Back in November ’12 I had a Citizen 6-speed Folding bike fall into my lap (pictured above). It needed a little TLC as it had been completely submerged in salt water (thanks Hurricane Sandy!), but it had good bones. I happen to moonlight as a bike mechanic so it wasn’t a big deal to tear the bike down, clean it, and rebuild it. After a few hours of wrenching the bike had been salvaged. Since I already have the Dahon folder in NYC I decided to keep the Citizen in Rochester for those weekends away from NYC where I’m not able to bring my full size Cannondale or Specialized rides.

All folding bikes have a unique geometry. You sit more upright. The handle bars are fairly close to the body. Steering is a bit more jittery than a normal bike. Riding a folding bike generally targets a different subset of muscles. In particular I find they work the quads a bit more than a bike with a traditional geometry. They also have more limited gearing–better suited for a ride to the grocery store or a short commute than for a faster paced ride down the waterfront. On the flip side they accelerate damn quick and they are as maneuverable as an r/c car. You’d be hard pressed to ride a long bike tour on one (but people do!). They are definitely better suited for a shorter ride. So how do the Citizen and Dahon bikes compare? Both are surprisingly comfortable to ride. I’d compare the ride of the Citizen to a 1960’s lincoln where the Dahon rides a little stiffer. The Citizen comes with one of the softest most springiest saddles I’ve ever sat on. The Citizen just sort of floats down the road. The Dahon handles a little more assuredly. The Dahon’s seating position is a little more comfortable. While the handlebars are quite a bit closer to the body than on a traditional bike, they are further away than on the Citizen. The Citizen let’s you raise the handlebars higher than the Dahon. Both share the same gearing with grip shifters (compact!). The Dahon is a bit lighter, weighing in at 26.5lbs. The Citizen weighs in at 28.4lbs. When folded the Dahon is more compact. Both have a luggage rack for convenience and fenders to protect you from road spray/debris. The biggest difference between the Citizen and Dahon models I have is the hinge/latch designs. The Dahon hinges have much more play to them. They fold/unfold easier but you can definitely feel them flex while riding. I believe some of the newer models are a bit stiffer. The Citizen is extremely stiff when unfolded and locked. I definitely have more confidence in the Citizen hinges/latches.

Are folding bikes for everyone? Defintely not. If you’re a bike junkie like me though, you definitely need one (or two!) in your collection. The convenience makes them a worthwhile investment!