Updated: What The Hell Is This Car Doing? 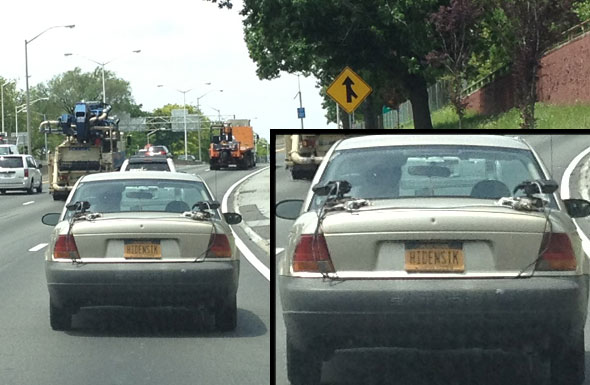 Today I was driving along the Long Island Expressway in Queens, NY when I got the distinct feeling I was being watched. I look to my left — nothing in the fast lane. I look to my right — what the hell? I see what appears to be an old Saturn with some sort of Radar/Lidar/Camera mounted on the trunk and a laptop on the passenger seat. I couldn’t make out much on the laptop screen but I could clearly see some sort of video feed on the top corner or the display. The rest of the screens content was far too difficult to make out. I decided to drop in behind the car, which was driving in the slow lane, for a better look at the trunk mounted apparatus. The man driving the car was definitely aware that I had taken an interest to whatever he was up to and began driving erratically, weaving through traffic, increasing speed, trying to put some distance between us. I didn’t feel the need to endanger anyone else on the road so I didn’t try to keep up with him. In the end I didn’t have to as within a miles distance I was directly behind his car again. Weaving and speeding had gotten him nowhere. I grabbed the camera and snapped a couple of pictures. The man, seemingly a little paranoid, noticed my taking pictures and quickly exited the expressway. I stayed on and continued to my destination. So I’m left with the question as to what exactly this guy was up to. The license plate was not an “official” plate (used on government vehicles) and the car was older and was not a make/model commonly employed by government offices. I can only assume he’s normal citizen. What data is he collecting? How is it being used? Is this activity legal? All questions I’d love an answer to. If you’ve seen this vehicle with the New York State license plate HIDENSIK (or possibly HIDENS1K), call the police, then let me know when and where in the comments!

Update (9-5-2012): Apparently this vehicle has been scoping out neighborhoods in Sleepy Hollow, NY. I just received an email from someone who stumbled upon this post. They claim this vehicle was photographing their house a few nights ago. They also spotted it driving through their street multiple times yesterday. When they attempted to approach the vehicle it sped away. Apparently when they reported the suspicious activity to the Sleepy Hollow Police Department the police could not find a record for the license plate HIDENSIK, leading them to believe the license plate is a fake. Very sketchy. Very sketchy indeed!

4 Responses to Updated: What The Hell Is This Car Doing?